By jessefewellApril 12, 2009Blog, Uncategorized
No Comments

This past Thursday, the Washington DC chapter of the Agile Project Leadership Network conducted its monthly meeting. The chapter hosted a roundtable on Agile in the Government, and featured the following panelists: 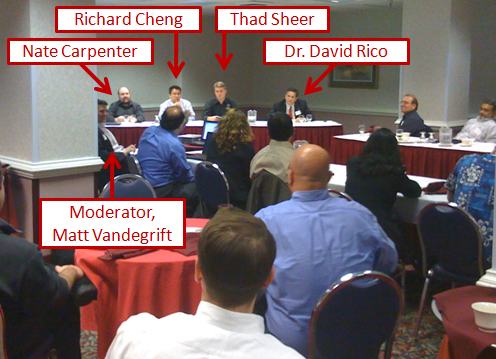 With such a talented panel addressing a topic that resonates strongly with Agile practitioners in DC, it was a format certain to deliver good nuggets. The moderator, Bearing Point’s Matt Vandegrift opened the evening with some discussion around current momentum and opportunity. For example, the CIA’s CIO has issued an agency wide mandate to use Agile Project Management. However, some expressed skepticism over the long-term impact of an appointee who would likely be off to another assignment before real culture change can happen. Mr. Carpenter suggested the most Agile-friendly agencies are those with an existing entrepreneurial culture of value delivery, such as IARPA or DARPA. However, most of us know those kinds of government cultures are far and few between.

Eventually, the age old debate surfaced of bottom-up grassroots adoption versus a top-down Agile mandate. Interestingly, a consensus emerged that this was the wrong debate. Both the panelists and the attendees called out mid-level government bureaucracy as the key barrier to effective Agile adoption.

Even if a senior sponsor wants to alter project scope to reflect emerging information, the project’s contract officers will resist it. A mid-level career staffer serving as the Contract Technical Representative (COTR) will be graded on performance-to-plan. Indeed, many situations carry more than just career consequences for adjusting scope, they may face criminal charges. Current procurement policies and statutes are designed with a plan-driven philosophy. If your project takes 2 years to get funded, it’s not the COTR’s fault the scope is no longer relevant to the mission, but he still gets stuck with it.

Mr. Carpenter further broke down the this dynamic into functional roles. In his mind, the real opportunity for breaking through this impediment is not the technical route (easier), not through the Prime/Sub teaming partnerships (harder), but from government PMOs.

Claire Moore, also from Sphere of Influence, challenged the group for some value metrics to facilitate such a cultural transition. What are some examples of programs that measure “value to mission”, rather than “performance to plan”? Several examples were cited (decreased costs, customer satisfaction, or Dr. Rico’s book ROI of Software Process Improvement), but all agreed getting contracting officers to implement them was the hard part.

Dr. Rico emphasized this point several times by issuing the charge that Agilists take influential positions in these policy organizations such as the Defense Acquisition University (DAU) or Institute for Defense Acquisition(IDA). One attendee raised the possibility of launching an Agile lobby, as a means to influence contracts. Yet another suggested outreaching to MBAs, to overcome the buzzword status Agile has in the minds of the few executives who have heard of it.

In all, the evening was a successful discussion. I left with a better sense of how I would tip-toe through a government environment as an Agile Project Manager.