By jessefewellMay 16, 2009Blog, Uncategorized
No Comments

Yesterday was the first day of what has been affectionately called â€œPMI Bureaucracy Trainingâ€. But really, I’ve already gotten more than my money’s worth. I came to this PMI Leadership Institute Meeting (LIM) in Amsterdam as a representative of the PMI Agile Community. The stated purpose was to get better acquainted with the inner workings of PMI, so that our scheduled end-of-June launch would be as successful as possible.

Opening Sessions:
The LIM opened with the obligatory welcoming remarks from PMI’s Chair Ricardo Vargas and CEO Greg Ballestrero. But there were some compelling quotes in what they said. 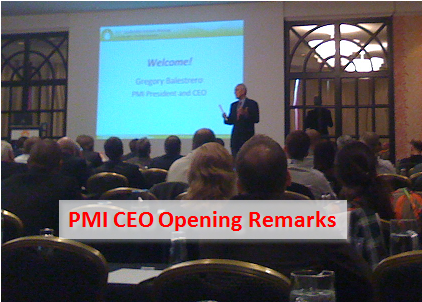 “everyone [in PMI] aims to the same [goal]…to increase value”

“the smallest PMI chapters in the world today (e.g. Poland) are leading innovations like branches”

“Peru is fastest growing country in world. 60-70% GDP is small business; Agile is even more relevant there.”

Those are just a few of the comments that had Agile overtones. There are even more nuggets at the PMI Agile Twitter feed. The next session was the keynote by Creativity guru Fredrik Haren. His key thrust was that in a global market, Developing countries have a competative advantage over Developed countries. His analysis and concepts dovetail very much with what I’ve recently read in Gladwel’s Outliers and Godin’s Tribes. 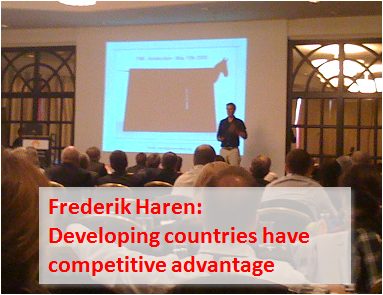 Core Values
Also fascinating was the announcement that PMI’s HQ is performing an initiative to codify its core values. PMI COO Mark Langley is leading a team of staffers and board members to discover what it is that PMI truly stands for. It’s a work in progress, but the current working set of core values are: Professionalism, Knowledge, Community & Volunteerism, Value of PM to Business. . However, as soon as they were revealed the team called out the key remaining issue: What does these values really mean? How do we define them, rather than relying on the varied perceptions and connotations they elicit. To address that, all the PMI leaders in attendance were asked to fill out a handout with these three questions:

I’ll be very interested to hear how you all would answer those questions. We’ll be watching what comes out of this exercise.

Networking.
So far, this was the real value for me as a community representative. I met several other SIG leaders who are also struggling to deliver community value during the Virtual Community launch/transition. I was able to thank PMI Houston’s Vice Chair for their support of APLN Houston, and we threw around the idea of a Houston Agile Local Interest Group/Branch to futher that collaboration. I was also introduced to PMIâ€™s Managing Director of PMIâ€™s India office, who explained to me that PMI hosts local Congresses in India and China, to serve those markets more directly than does the PMI Global Congress Asia Pacific. Dave Prior and I also went over to thank PMI Chairman Ricardo Vargas for his amazing keynote at last weekâ€™s Scrum Gathering Brazil (that will require a dedicated blog article).

Most compelling though was a heart-to-heart with a high level PMI official who was willing to lay out the bare truth. I asked questionss about how much autonomy a PMI Agile community would have and was told that “PMI prefers to be hands off”. Really? “PMI has been Big Brother over the past several years, but no longer wants to be Big Brother”. When I countered with the perception of the assimilation of all the SIGs into the VCP umbrella, the official explained “there are those within PMI who are very used to a tight control of IP, policies, and marketing. There are others who understand that to be competitive and responsive to a changing market we need to let go of some things. A lot of what you are seeing is the tension that comes from finding that balance.” As candid as the converstation was, it synched up with what was said elsewhere. Community advisor Dan Tuten said during a breakout that a PMI communities policies and procedures need only comply with the code of ethics. During conversations at the evening reception, Ricardo Vargas was passionate about PMI embracing social media as a way to deliver value in a relevant way. In a similar chat, Ballestrero was quite intolerant of a PMI management approach that was overly disciplined as to get in the way of adapting to the market.

All in all a very compelling first day. Now I’m off to the first session of day 2.