By jessefewellMarch 18, 2009Blog, Uncategorized
No Comments

Today was the final day of the Scrum Gathering.

The morning started off with a wrap-up of the Open Space topics. However, before I could check whether there were any topics I was interested in, I got pulled into another side conversation in the hallway. This one was with with Stacia Broderick and some of the CSTs about what questions we wanted the “guru roundtable” to address.

After proposing some incendiary questions, I went off to setup for my talk: “PMP? ScrumMaster? What’s the Difference?”. Although PMI’s IT&Telecom SIG recorded the session, I’ll give you some of the nuggets that came out of the talk:

After the talk, we all moved into the large ballroom for a lunch session with an expert panel. The panel consisted of Ron Jeffries (co-founder of eXtreme Programming), Mike Cohn (Scrum guru), Jim Coplien (software guru), Alistair Cockburn (Use case guru and agile co-founder), and Ken Schwaber (Scrum co-founder). There were some excellent quotes that came out the discussion, many of which I posted in real time on the PMI Agile twitter feed. Samples include:

After the panel, I helped PMI’s IT&Telecom SIG perform a couple of interviews in the conference hallway. First, I got to interview Ainsley Nies about her role in making the Open Space a success. Then, Laurentiu Hirsescu interviewed Alistair Cockburn about his role in the Agile movement. The videos should be posted in the next week or so, at which point I’ll send out an update. 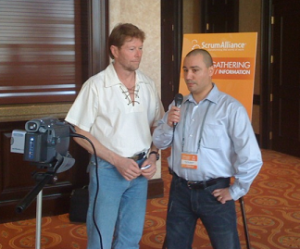 Finally, I wrapped up my day by having a very late lunch with Mike Cottmeyer, where we reflected on the events of the week and postulated about what’s next for PMP Agilists in adding the right kind of value to our projects.

All in all, it was a great 4 days. I learned a lot that will make me a better process coach, and met many other Agile-minded PMPs that I can learn from going forward.