The magic secret to achieving your goals? Be willing to fail first.

By jessefewellDecember 20, 2013Blog, Uncategorized
No Comments

This year I accomplished one of my dream goals to run a marathon. It was a climactic moment where I graduated into another class of achievers. Want to know my secret for how I did it?

I failed the first time. And that failure directly led to my success. 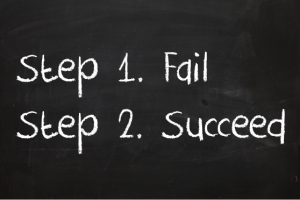 I had actually set the goal of running a marathon back in 2012. Near the middle of the year, I created a December 6th deadline by paying money for the Rock ‘n’ Roll Marathon in Las Vegas. I downloaded a running plan, and bought some shoes. Then, with two months left I got shin splints. When I told the doctor that resting for several days didn’t do the trick, she said, “No Jesse. You need to stop running for several weeks. I’m sorry, but you’re not going to be heal in time to finish your training program.”

Modern management methods like Agile or Lean Startup espouse the virtue of failing fast. That is, if you’re going on the wrong path, you want to find out sooner than later. Better to get slapped in the face early in the game, rather than spend bucket loads of time and money on the wrong thing. All of that sounds great, but I can assure you that when the doctor gave me that news, I was crushed. I had already paid for the race, as well as the hotel and airfare to get there. But after the dust settled, I recovered, flew to Vegas, and ran the HALF marathon at that event.

Or put another way,

Failure is directly correlated to progress, no matter how small.

After the half-marathon, I had to look inward and ask WHY did this happen. I was a decent cross-country / track-and-field runner in High School and College. I SHOULD have done better. So, I started asking and reading. I bugged friends and colleagues who had run marathons before, and heard what hurdles they slammed into. I read books about the barefoot running and mid-foot strike, which led to me altering my stride. I read another book about over-training and going too hard too fast, which led to me slowing down my pace. What happened was this:

Given that I had been a casual runner my whole adult life, I assumed I knew something about running. But there is a difference between a 2 miles on the treadmill at the gym versus spending 2 hours on the road. I was in a different ball game, and needed that failure to wake me up. I wonder if this has ever happened to you.

3. Resolve to be patient

It was about in March when I started running again with some kind of regularity and conviction, and it was time to reset that goal again. Last time, going aggressively got me injured. So, this time I’d do it differently. I planned my next half-marathon in 4-5 months,  and a full marathon another 2 months later. It turned out to be critical. I spent most of the year traveling to business clients all across the country, which made regular exercise really tough.

Failure reminds me to take my goals seriously

Achieving goals comes only as a result of developing new habits, and new habits take time. Lots of time.

The marathon was one challenge I overcame this year, but there have been plenty of other  pains / burdens / failures. In each case, momentum came only after I worked to re-frame my failure, re-focus on learning, and resolve to be patient.

Now it’s your turn. Which of your life goals did you achieve only after bumps and hurdles?

This website uses cookies to improve your experience while you navigate through the website. Out of these, the cookies that are categorized as necessary are stored on your browser as they are essential for the working of basic functionalities of the website. We also use third-party cookies that help us analyze and understand how you use this website. These cookies will be stored in your browser only with your consent. You also have the option to opt-out of these cookies. But opting out of some of these cookies may affect your browsing experience.
Necessary Always Enabled
Necessary cookies are absolutely essential for the website to function properly. This category only includes cookies that ensures basic functionalities and security features of the website. These cookies do not store any personal information.
Non-necessary
Any cookies that may not be particularly necessary for the website to function and is used specifically to collect user personal data via analytics, ads, other embedded contents are termed as non-necessary cookies. It is mandatory to procure user consent prior to running these cookies on your website.
SAVE & ACCEPT